GETTING RID OF WEEDS 7th December 2016

GETTING RID OF WEEDS 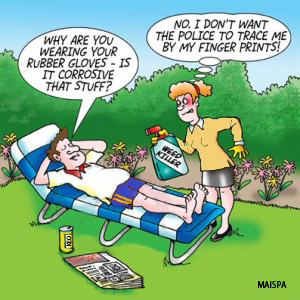 6 ways to murder them with household items. You’ll save money and show no mercy to your garden’s uninvited guests.

The first rains have arrived and it’s now time to watch the weeds grow right in front of your eyes.

Nothing ruins your garden or yard like weeds, those uninvited guests that rob your plants of space and nutrients. So murder those weeds most foul, but without harmful chemicals that can do you in, too.
Who says you need standard weeding tools to kill weeds? Here are seven ways to kill weeds with weapons you already have around your house.
How to kill weeds:

1. Newspaper
A carpet of newspaper, which blocks sunlight and oxygen from reaching the soil, will smother weeds already sprouted and prevent new ones from growing. Throw down newspaper in 10-sheet layers, wet to hold it down, and cover with an inch or two of mulch. If weeds begin to grow in the mulch, add more layers, making mulch-newspaper lasagna, which eventually will decompose and nourish the soil.
2. Old Shower Curtains and Carpet Samples
Spreading these useless items in garden paths or between rows will keeps weeds from ever showing their unwanted heads. Cover with mulch.
3. Vinegar
The acetic acid in 5% vinegar is a desiccant that sucks the life out of plant leaves. It’s most destructive to young plants with immature roots, though it just rolls off weeds with waxy leaves, like pennywort or thistle.
Make sure you cover desirables before spraying, because vinegar is an equal opportunity killer. Keep your spray on-target by removing the bottom from a 2-liter plastic soda bottle, and placing it over the weed. Spray vinegar into the mouth of the bottle, which will keep it from splattering on your vegetables.
4. Vodka
Don’t know if vodka makes weeds fall down dead or drunk, but 1 ounce mixed with 2 cups of water and a couple of drops of dish soap will dry out weeds that live in the sun. Doesn’t work that well on shade-loving weeds. Protect desirables, because vodka will dry them out, too.
5. Soap
The oil in soap can break down waxy or hairy weed surfaces, making them vulnerable to desiccants. So add a few drops of liquid dish detergent to vinegar or vodka sprays to keep the solution on leaves. The soap also makes leaves shiny, which will help you keep track of what you’ve sprayed.
6. Boiling Water
After you’ve made yourself a cup of tea, take the kettle outside and pour the boiling water on weeds, which will burn up. This is a particularly good way to whack driveway and walkway weeds, because the boiling water can run off impervious surfaces and cool before it reaches border plants.

Care Tips For Your Lawn In Winter 13th December 2016