Cost of living in Paphos Cyprus 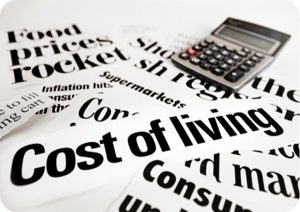 It is difficult to say anything overall about living costs in Cyprus as it depends on what you compare it with and where you come from. It is not as cheap as it used to be before Cyprus joined the euro and had the Cypriot Pound.
But very few things are expensive and most goods and commodities are average price compared to the rest of Europe. Many daily groceries are around 10-20% cheaper than in Northern Europe.
Here are some things that stand out cost-wise:
What’s is cheap in Cyprus
These are some of the things that will help you keep the costs of living in Cyprus low:
Local seasonal fruit
Local fruits and veggies are very cheap to buy at the local fruterias and supermarkets
Rent
Renting property is cheap.
Most utility bills
Electricity and particularly water bills are usually very low.
Hiring a cleaner (and most other services)
Hiring people to help you with various services such as cleaning, gardening, babysitting and similar is cheap. Often the hourly cost starts at €5, but there’s usually an increase in the quality if you go a bit higher.
Getting your car washed
This is magnificent. Get your car washed for as little as €5
Beers and local spirits
If you do enjoy the odd drink this is good news. Local spirits and beer are very cheap.
What’s expensive in Cyprus
Here are some of the services and products in Cyprus that are relatively expensive:
Internet access
Internet access in Cyprus is quite expensive, but you can get reasonably priced internet.
Milk is one of the few everyday products that are quite expensive. Most of it is imported as there’s not a lot of cattle in Cyprus.
Electronics
The purchasing power in Cyprus is lower than in many other European countries. However, this isn’t reflected in costs of electronics. But there are some cheap alternatives available or you can order it online.
Clothing
Clothing is not as such cheap – there’s just limited options and very little that is very cheap saying that prices are coming down. Luckily the internet is full of great options for online shopping. Just make sure they send from the EU to avoid import taxes.
Electricity bills in summer and winter
This is only relevant if you are a heavy user of air conditioning. If it’s cooling most of the day during summer and heating during winter, you can expect a significant increase in the numbers on your electricity bill.
However, if you plan on living in Cyprus it might be recommended to get used to the temperatures (particularly during summer) and save some euros from your budget.
You should look into installing solar panels. With the Net Metering scheme in Cyprus, you can save up to an estimated €1,250 yearly for up to 25 years. All it takes is a one-off investment.

Bringing your best friends(pets) to Cyprus