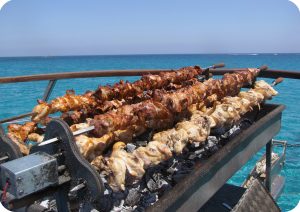 Cypriot cuisine is the cuisine of Cyprus and is closely related to Greek and Turkish cuisine; it has also been influenced by Byzantine, French, Italian, Catalan, Ottoman and Middle Eastern cuisines.
Frequently used ingredients are fresh vegetables such as zucchini, green peppers, okra, green beans, artichokes, carrots, tomatoes, cucumbers, lettuce and grape leaves, and pulses such as beans (for fasolia), broad beans, peas, black-eyed beans, chick-peas and lentils. Pears, apples, grapes, oranges, Mandarin oranges, nectarines, mespila, blackberries, cherries, strawberries, figs, watermelon, melon, avocado, citrus, lemon, pistachio, almond, chestnut, walnut, hazelnut are some of the commonest of the fruits and nuts.
For Greek Cypriots, there are many fasting days defined by the Orthodox Church, and though not everyone adheres, many do. Pulses are eaten instead, sometimes cooked in tomato sauce (yiahni in Greek) but more usually simply prepared and dressed with olive oil and lemon. On some days, even olive oil is not allowed. These meals often consist of raw onion, raw garlic.
Seafood
The most traditional fish is salt cod, which up until very recently was baked in the outdoor beehive ovens with potatoes and tomatoes in season. Gilt-head bream is popular because it is relatively inexpensive and like sea bass extensively farmed
Many fish restaurants also include in the fish meze a variety of different food which include fish, for example fish souffle and fish croquettes.
Vegetables
Salad vegetables are eaten at every meal, sometimes whole. More often, they are prepared chopped, sliced, and dressed with lemon and olive oil. In the summer, the usual salad is of celery leaves and stalks, parsley, coriander leaves, tomatoes, and cucumber
Bamies (okra or ladies’ fingers) are baked in the oven with tomato and oil, and kounoupidhi (cauliflower) is also given this treatment.
Vazania/patlican (aubergines) can be prepared in a variety of ways, including stuffed and in moussaka. They are commonly fried and stewed slowly in oil, where the cooking time brings out the flavour and also allows them to shed the oil they have absorbed
Meat
Preserved pork is very popular, and before refrigeration, it was the main source of red meat available to Cypriots.
Lountza is made from the pork tenderloin. After the initial brining and marinading in wine, it is smoked. Although it can be aged, many prefer younger, milder lountza
Lamb and goat meat is also preserved as samarella, made very salty to prevent the fatty lamb meat from going rancid. Very popular amongst both communities is preserved beef. The whole silversides and briskets are salted and spiced quite powerfully to make pastourma/bastirma.
Many Cypriots consider snails a delicacy. The most popular way to prepare snails is to barbecue them. Another popular variation is to cook them with onions, garlic and tomatoes.
Meze

Cypriot meze
Mezedes is a large selection of dishes with small helpings of varied foods, brought to the table as a progression of tastes and textures. The meal begins with black and green olives, tahini, skordalia (potato and garlic dip), humus, taramosalata (fish roe dip), and tzatziki all served with chunks of fresh bread and a bowl of mixed salad. The meal continues with fish, grilled halloumi cheese, lountza (smoked pork tenderloin), keftedes (minced meatballs), sheftalia (pork rissoles), and loukaniko (pork sausages).
Desserts
Loukoumades (fried doughballs in syrup), loukoum, ravani, tulumba and baklava are well-known local desserts. There are also pasti?, cookies made of ground almonds, that are offered to guests at weddings.
Cypriots also make many traditional sweets that are usually made of turunch/ bergamot, figs, tiny aubergines, fresh fleshy walnuts, watermelon or pumpkins processed akin to jam but without the over-cooking.
Cheeses
Halloumi is a semi-hard white-brined cheese with elastic texture, made in a rectangular shape from a mixture of goat and sheep milk; it may be sliced and eaten fresh, grilled, or fried. Aged halloumi may be grated over pasta dishes. It is the national cheese of Cyprus.
Anari, is a crumbly fresh whey cheese, similar to ricotta, made from goat or sheep milk. Two varieties exist, dry and fresh anari. Dry anari is salted and is much harder than the fresh variety, and is served grated with pasta dishes and Giouvetsi, while fresh anari is eaten in slices with honey or carob syrup.
Drinks
Non alcoholic
Ayran is a traditional drink made of milk. Its recipe varies from region to region.
Alcoholic
Among Cypriots traditional brandy and zivania are of the most popular drinks on the island. Zivania, a grape distillate similar to Cretan raki, is another popular spirit.
Evidence of wine production on Cyprus goes back for millennia. Commandaria, the oldest wine in continuous production, is a popular dessert wine.